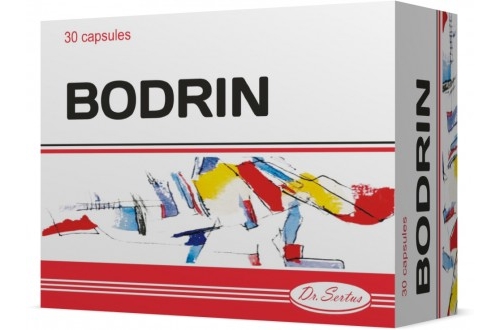 Bodrin produces antidepressant and sedative effects. The drug improves mood, increases mental and physical performance, and normalizes sleep. The action of the drug is determined by its components.

Hipericum Perforatum flower dry extract possesses antidepressant, anxiolytic and sedative action. It inhibits МАО activity, binds to benzodiazepine receptors, inhibits reuptake of serotonin, norepinephrine and dopamine. The extract has a favorable effect on the functional state of the central and the autonomic nervous system. It improves mood, increases mental and physical performance, normalizes sleep, and produces a spasmolytic effect.

Leunurus Cardiaca stem and leaf dry extract produces a sedative effect due to inhibition of excitation processes in the central nervous system. It also possesses cardiotonic and diuretic action.

The action of Bodrin is determined by the cumulative properties of its components, which makes kinetic observations impossible.

- neuroses (including those accompanied with tachycardia and cardialgia);

- hyperexcitability, including in cases of skin diseases, pains, injuries and burns (as part of complex therapy);

- initial stage of arterial hypertention (as part of complex therapy).

Bodrin is administered orally, one capsule before bedtime, followed with a sufficient amount of fluid.

- hypersensitivity to the components of the drug;

- gastric and duodenal ulcer, erosive gastritis in the exacerbation phase;

During treatment patients (especially light-skinned ones) should avoid prolonged exposure to the sunlight and visiting of tanning salons.

Simultaneous administration of Bodrin with MAO inhibitors is not recommended.

Exercise caution when driving and performing other potentially dangerous activities requiring increased attention and speed of psychomotor reactions during treatment.

The drug is contraindicated in pregnancy and lactation.

The drug is contraindicated to children under 12 years old.

The drug increases the action of sleep medicines, analgesics and spasmolytics.

Overdose may cause depression of the central nervous system and somnolence.

10 capsules in a blister.

3 blisters together with an enclosed leaflet in a carton box.

Store in a protected from moisture and light place at temperature not exceeding  25°С.

The holder of trade mark and marketing authorization is