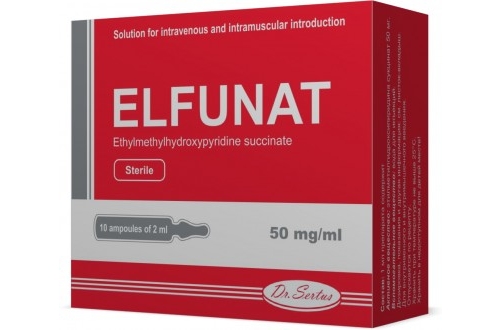 Solution for intravenous and intramuscular introduction.

1 ml of the medicine contains:

It improves metabolism and blood supply to the brain. It stabilizes the blood cell membrane structures and prevents hemolysis. The drug has a hypolipidemic effect, lowers the total cholesterol level and the level of low-density lipoproteins. It reduces the enzymatic toxemia and endogenous intoxication in acute pancreatitis.

The drug action mechanism is conditioned by its antioxidant and membrane protective activity. It inhibits the processes of lipid peroxidation, increases the superoxide oxidase activity and the ratio of protein to lipids, and improves the structure and the function of the cell membrane. It modulates the activity of membrane-bound enzymes (calcium-independent phosphodiesterase, adenylate cyclase, acetylcholinesterase), receptor complexes (benzodiazepine, GABA, acetylcholine) that potentizes their ability to bound with ligands, favors the restoration of structural-functional organization of biomembranes. Thus, it is improved the transport of neuromediators and correspondingly synaptic transmission.

Elfunat increases the brain dopamine concentration, strengthens the compensatory activation of aerobic glycolysis and lowers the extent of the oxidation processes inhibition in Krebs cycle in hypoxic conditions with the increasing of adenosine triphosphate (ATP) and phosphocreatine, activates the mitochondrion energosynthesis functions and cell membrane stabilization.

Elfunat normalizes the metabolic processes in stunned myocardium, reduces necrotic zone, restores and improves the electrical activity and myocardial contractility, as well as increases the coronary blood flow in the ischemic zone, reduces the consequences of reperfusion syndrome in acute coronary insufficiency. It increases the antiangial activity of nitro drugs. It favors the maintenance of retinal ganglion cells and visual nerve fibers in progressive neuropathy caused by chronic ischemia and hypoxia. The drug improves the functional activity of retina and optic nerve, increasing the visual acuity.

It quickly passes from the blood channels to the organs and tissues and it is quickly eliminated from the body. The mean residence time of the drug in the body is 0.7-1.3 hours.

It is eliminated from the body in urine predominantly in form of glucuronic conjugates and in small quantities as unchanged drug.

- brain functions disturbances due to the atherosclerosis (mild cognitive impairments);

- acute myocardial infarction (from the first day) as part of complex therapy;

- alcohol withdrawal syndrome with predominance of neurotic and vegeto-vascular disorders in clinical picture;

- primary open-angle glaucoma of different stages as a part of complex therapy.

Elfunat is administrated for intramuscular or intravenous introduction (by stream or by drop infusion). In infusion introduction the drug should be diluted in 0.9% sodium chloride solution.

By stream the drug is injected slowly during 5-7 minutes, by drop infusion – at the rate of 40-60 drops per minutes. The maximum daily dose shouldn’t exceed 1200 mg.

Dyscirculatory encephalopathy in the phase of decompensation - intravenously by stream or by drop infusion of 200-500 mg 1-2 times per day during 14 days, then intramuscularly 100-250 mg per day during the following 2 weeks.

For course prophylaxis of dyscirculatory encephalopathy - intramuscularly 200-250 mg 2 times per day during 10-14 days.

Vegeto-vascular dystonia and anxiety disorders in neurotic and neurosis-like conditions - intramuscularly 50-400 mg per day during 14 days.

In acute myocardial infarction as part of complex therapy Elfunat is injected intravenously or intramuscularly during 14 days against a background of traditional myocardial infarction therapy comprising nitrates, beta-adrenoblockers, angiotensin converting enzyme inhibitors (ACE), thrombolytics, anticoagulants and antiplatelet drugs, as well as symptomatic agents according to indications. Intravenous way of drug introduction is preferable during the first 5 days for maximum effect and in the following 9 days the drug can be injected intramuscularly.

Intravenous way of drug introduction is carried out by drop infusion and slowly (to avoid undesirable side effects) with 0.9% sodium chloride solution or 5% dextrose (glucose) solution in volume of 100-150 ml during 30-90 minutes. If necessary it is possible to apply slow stream infusion of the drug during not less than 5 minutes.

In acute pyo-inflammatory processes in the abdominal cavity (acute necrotizing pancreatitis, peritonitis) the drug is prescribed at first day both in preoperative and postoperative period. Injected doses depend on the form and severity of a disease, process prevalence, variants of clinical course. The drug withdrawal should be gradually performed only after steady positive clinico-laboratorial effect.

Severe necrotizing pancreatitis - intravenously by drop infusion in dose of 800 mg at first day when the double injection regimen is given; then 200-500 mg 2 times per day with gradual daily dose lowering.

In most severe necrotizing pancreatitis the initial dose is 800 mg per day till the stable relief of pancreatogenic shock manifestations, after stabilization of condition - 300-500 mg 2 times per day intravenously by drop infusion (in 0.9% sodium chloride solution) with gradual lowering of daily dose.

Primary open-angle glaucoma of different stages as a part of complex therapy - intramuscularly 100-300 mg per day, 1-3 times per day during 14 days.

- children and adolescents under 18 years old;

EFFECTS ON ABILITY TO DRIVE AND USE MACHINES

During the treatment it is necessary to be careful during driving and operating other potentially dangerous kinds of activity demanding the heighten attention concentration and rate of psychomotor reactions.

There is no data about the drug administration during pregnancy and during lactation.

The drug potentiates the action of benzodiazepine anxiolytics, antiepileptics (carbamazepine), antiparkinsonian (levodopa) drugs and nitrates. It reduces the toxic effects of ethyl alcohol.

Treatment: as a rule it is not required - the symptoms disappear independently during a day. In severe cases in insomnia - nitrazepam 10 mg, oxazepam 10 mg or diazepam 5 mg. In excessive increase of arterial pressure - antihypertensive drugs under the control of arterial pressure and/or it is necessary to add nitro drugs to the therapy.

Solution for intravenous and intramuscular introduction.

5 colourless glass ampoules of 2 ml in a contour tray.

2 contour trays with enclosed leaflet in a carton box.

3 years from the manufacture date.

Do not use after expiry date.