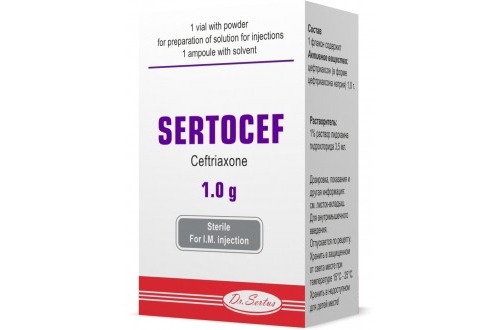 Powder for solution for injections

Solvent (for dosage form with solvent):

Solvent (for dosage form with solvent):

Sertocef is a broad-spectrum antibiotic of III generation cephalosporins. It has a bactericidal action by means of synthesis inhibition of bacteria cell membranes. It is active against most gram-negative, many gram-positive causative microorganisms and some anaerobes. It is resistant to beta-lactamases produced by bacteria.

Many strains of the above mentioned microorganisms that steadily proliferate in presence of other antibiotics, for example, penicillins, first- and second-generation cephalosporins and aminoglycosides, are sensitive to Sertocef. According to clinical data, good drug efficacy is observed during primary and secondary syphilis.

Sertocef quickly diffuses in the interstitial fluid, where it maintains its bactericidal action against sensitive microorganisms for 24 hours. The half-life is long, and it is about 8 hours in adults, it approximately twice longer in elderly people older than 75 years, and it is 6.5-8 days in neonates.

In adults, 50-60% of Sertocef is excreted unchanged in urine, 40-50% - in bile. In neonates, approximately 70% of the injected dose is excreted by the kidneys. In adults with renal or hepatic dysfunctions, Sertocef is almost unchanged (insignificant prolongation of the half-life period is possible), due to redistribution of functions: if the renal function is impaired the excretion in bile is increased, and if renal pathology occurs the excretion by the kidneys is increased.

Sertocef is effective against all infections caused by bacterial strains sensitive to the drug:

- inflammation of cerebral meninges (bacterial meningitis, including in neonates);

- infections of skin and soft tissues, infected wounds and burns;

- prophylaxis and treatment of infections in patients with compromised immunity (including those with neutropenia and oncological diseases);

- prior surgical interference in order to prevent infections.

POSOLOGY AND METHOD OF ADMINISTRATION

Sertocef is injected intramuscularly and intravenously by stream or drop infusions.

Rules for the drug preparation and injection

Inject deeply in the glute. It is recommended to inject not more than 1 g in one clunis.

Dissolve 500 mg Sertocef in 5 mL of water for injections,

dissolve 1 g Sertocef in 10 mL of water for injections.

Inject slowly in vein for 2-4 munites.

Neonates (up to 2-week age): Sertocef is prescribed in a dose of 20-50 mg/kg bw once a day. The dose exceeding is unacceptable due to immaturity of enzyme system in neonates.

For infants and children under 12 years old: daily dose of Sertocef is 20-80 mg/kg bw once a day. Usual doses for adults are used in children with body weight 50 kg and more.

Adults and children older than 12 years: 1 g once a day (every 24 hours). In serious cases or during infections caused by bacteria with only moderate sensitivity to ceftriaxone, daily dose is 2 - 4 g.

The treatment duration depends on the nature and seriousness of disease. As with other antibiotics, Sertocef administration is recommended to continue at least for 3 days after body temperature normalization.

Intravenous injection of the drug in a dose of more than 50 mg/kg bw must be performed by drop infusion for not less than 30 minutes.

In bacterial meningitis, the drug is given in initial dose of 100 mg/kg bw once a day to neonates and children. Maximum daily dose is 4 g. After causative agent identification, the dose can be reduced.

During gonorrhoea treatment, the recommended dose is 250 mg Sertocef for single intramuscular injection.

In case of concurrent hepatic and renal dysfunction, and also in patients undergoing hemodialysis, serum ceftriaxone concentration should be regularly controlled.

For prophylaxis of postoperative infections it is recommended a single injection of 1-2 g Sertocef for 30-90 minutes before operation. In colorectal surgery, 2 g should be given intramuscularly, in conjunction with a suitable agent active against anaerobic bacteria.

- known hypersensitivity to cephalosporins and penicillins;

- concurrent administration with calcium-containing infusions, due to the risk of ceftriaxone calcium precipitation;

- premature neonate aged up to 41 weeks old (a weeks of pregnancy + weeks of life);

- neonates aged up to 28 days old, born with jaundice, hyperbilirubinemia or acidosis.

Contraindications for lidocaine should also be considered if lidocaine is used as a solvent (intramuscular injection).

In most cases Sertocef is well tolerated. Side effects are usually reversible and disappear after the drug withdrawal.

Local reactions: possible development of phlebitis after intravenous injection of the drug. It can be avoided when the drug is injected slowly (for 2-4 minutes); intramuscular injection without lidocaine is painful, it is possible the formation of infiltrate at injection site.

As with other cephalosporins, it is necessary to take into account the possibility of anaphylactic reactions during Sertocef treatment.

Regular control of peripheral blood picture is required during a long-term treatment with the drug.

In rare cases during ultrasonic diagnosis it is possible the occurrence of gall bladder obscuration, which disappears after the drug cancellation. If this sign is accompanied by pains in right hypochondrium, it is recommended to continue drug administration on background of symptomatic treatment.

Each gram of Sertocef contains approximately 3.6 mmol sodium. It should be taken into consideration by patients on a controlled sodium diet.

INFLUENCE ON ABILITY FOR DRIVING AND OPERATING WITH MECHANISMS

No data on Sertocef influence on ability for driving and operating with mechanisms are available. But one should keep in mind the possibility of dizziness during the drug therapy.

Sertocef administration during pregnancy is possible only if potential benefit to the mother outweighs any potential risk to the fetus (ceftriaxone crosses the placental barrier).

If it is necessary to administer the drug during lactation period it should be decided on breastfeeding cancellation, as ceftriaxone is excreted in breast milk.

INTERACTION WITH OTHER DRUGS

In case of concurrent administration with loop diuretics (e.g., furosemide), renal dysfunction is not observed.

In concurrent administration with nonsteroidal antiinflammatory drugs and other inhibitors of platelet aggregation the probability of hemorrhage is increased.

Sertocef and aminoglycosides exert synergistic effects against many gram-negative bacteria. Such combination is justified during treatment of serious and life threatening infections (e.g., caused by such causative microorganism as Pseudomonas aeruginosa).

Sertocef should not be mixed in one vial or in a syringe with other antibiotics.

No data on the drug overdose are available.

0.5 g or 1.0 g powder for solution for injections in a vial together with a solvent.

1 vial with powder for solution for injections and 1 ampoule with solvent in a carton box with enclosed leaflet.

10 vials in a contour tray.

1 contour tray in a carton box with enclosed leaflet.

Store in a protected from light place at temperature 15ºС - 25ºС.

Store in a protected from light place at temperature 15ºС - 25ºС.