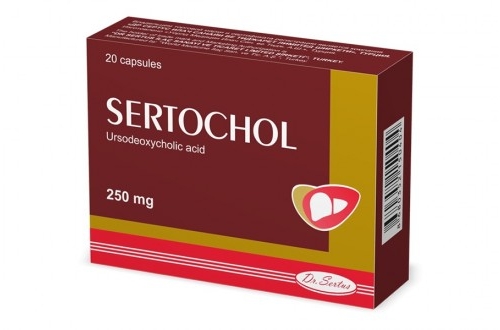 ATC CODE OF THE DRUG

Ursodeoxycholic acid produces direct cytoprotective membrane-stabilizing effect on hepatocytes, cholangiocytes and epitheliocytes of the gastrointestinal tract. The drug forms double molecules that interact with lipophilic membrane structures, embed into cell membranes and stabilize them. It protects liver and bile duct cells against damaging factors, and makes them resistant to the action of cytotoxic micelles.

The drug possesses immune-modulating activity, decreases expression of immune-pathologic reactions in liver due to reduction of expression of HLA-1 histocompatibility antigens on hepatocytes and HLA-2 on bile duct cells, as well as due to suppression of immunoglobulin activity (predominantly of IgM). It decreases formation of cytotoxic Т-lymphocytes.

Stimulating exocytosis in hepatocytes by way of activation of Са2+-dependent α-proteinkinase in cholestatic condition, ursodeoxycholic acid decreases concentration of bile acids toxic for hepatocytes, and induces choleresis with high content of bicarbonates, which leads to an increase in bile passage.

Effective dissolution of gallstones requires that these are purely cholesterol ones, their size must not exceed 15-20 mm, and the gall bladder (filled with stones not more than in half) and bile ducts preserve their function in full.

The drug regulates apoptosis processes (ageing and death of cells) impaired due to pathology of liver and other organs. Administration of ursodeoxycholic acid inhibits growth of colon cancer cells.

After ingestion of the drug ursodeoxycholic acid absorbs in the intestine by way of passive diffusion, and in the ileum by way of active transport. Peak plasma concentration is reached within 30-60 minutes after ingestion.

- dissolution of cholesterol gallstones. Cholesterol stones must not look like dark spots on the roentgenogram and must not exceed 15 mm in diameter. In spite of the presence of stones, gall bladder function must not be impaired;

- treatment of gastritis with bile reflux;

- symptomatic treatment of primary biliary cirrhosis (PBC) in the absence of signs of decompensation.

Sertochol is administered per os once daily before bedtime or twice daily.

The capsule is swallowed whole, without chewing, followed with sufficient amount of water (possibly with food or a snack).

In cholelithiasis: the treatment course is continuous and prolonged (from several months to 2 years); the daily dose is 10-15 mg/kg of body weight. The whole daily dose is administered before bedtime. Treatment is continued until complete dissolution of the stones and 3 months after for prevention of lithiasis relapses. If gallstones do not decrease in size within 12 months from the beginning of treatment, administration of the drug is considered unreasonable. For prevention of recurrent lithiasis after cholecystectomy the dose of the drug is 300 mg twice daily for several months (3 months on an average).

In gastritis with bile reflux the dose of 300 mg of the drug is administered before bedtime. Treatment course is from 10-14 days to 6 months (up to 2 years, if necessary).

In other cases the dose is determined in an amount of 10-15 mg/kg (up to 20 mg/kg, if necessary) of body weight daily, divided into 2-3 separate doses; the drug is administered from 6 months to several years.

For children over 6 years old (with body weight of more than 20 kg) the dosage is individually determined in an amount of 10-20 mg/kg of body weight daily.

- hypersensitivity to the active ingredient or to other ingredients of the drug;

Clinical studies reports of pasty stools and diarrhoea are numerous.

Very rarely severe pain in the right part of the abdomen was reported during treatment of primary biliary cirrhosis.

Very rarely calcification of gallstones may develop during treatment with ursodeoxycholic acid.

Very rarely during treatment of advanced primary biliary cirrhosis decompensation of liver cirrhosis developed and disappeared after withdrawal of the drug.

Sertochol should be taken under medical supervision. During the first 3 months of treatment, liver function parameters AST (SGOT), ALT (SGPT) and γ-GT should be monitored by the physician every 4 weeks, thereafter every 3 months.

When used for dissolution of cholesterol gallstones:

In order to assess therapeutic progress and for timely detection of any calcification of the gallstones, depending on stone size, the gall bladder should be visualised (oral cholecystography) with overview and occlusion views in standing and supine positions (ultrasound control) 6-10 months after the beginning of treatment.

Sertochol does not influence the ability to drive and to perform activities requiring high speed of psychomotor action.

The drug is contraindicated in the 1st trimester of pregnancy. Administration of the drug in the 2nd and 3rd trimesters is possible only in cases when the benefit for the mother outweighs potential risk for the fetus (no adequate and well-controlled studies of ursodeoxycholic acid administration in pregnant women have been performed).

There are no data on release of ursodeoxycholic acid into breast milk. If treatment with the drug in the period of lactation is necessary, the issue of weaning must be considered.

Since Sertochol is produced in the form of 300 mg capsules, the drug is not used in children under 6 years old (with body weight of less than 20 kg).

Antacids containing aluminium ions and ion exchange resins (colestyramine) decrease absorption of the drug. Should the use of a preparation containing one of these substances be necessary, it must be taken at least 2 hours before or after Sertochol capsules.

Sertochol can increase the absorption of cyclosporine from the intestine.

In isolated cases Sertochol can reduce the absorption of ciprofloxacin.

Hypolipidemic agents (especially clofibrate), oestrogens, neomycin or progestins increase saturation of bile with cholesterol and may decrease the ability of the drug to dissolve gallstones.

No reports of overdose are available.

10 capsules in a blister.

2 blisters together with an enclosed leaflet in a carton box.

The holder of trade mark and marketing authorization is