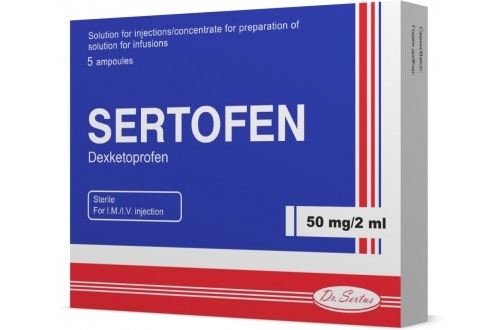 1 ampoule of the medicine contains

Sertofen is a nonsteroidal antiinflammatory drug (NSAID), a propionic acid derivative. It exerts analgesic, antiinflammatory, and antipyretic actions. The mechanism of action is associated with inhibition of the activity of cyclooxygenase-1 and cyclooxygenase-2 and with a decrease in the biosynthesis of prostaglandins that play a key role in the pathogenesis of inflammation, pain and fever.

In a combined therapy with opioid analgesics, dexketoprofen trometamol significantly (up to 30-45%) reduces the need for opioids.

Following intramuscular injection of dexketoprofen trometamol, peak serum concentration is achieved after an average 20 minutes (10-45 minutes). After a single injection in a dose of 25-50 mg, AUC is dose proportional following both intramuscular and intravenous administration. The relevant pharmacokinetic parameters are similar after a single and repeated intramuscular or intravenous injection, indicating that no drug accumulation occurs.

Dexketoprofen trometamol is characterized by a high plasma protein binding (99%). Mean value of Vd is below 0.25 L/kg.

In elderly subjects, there is an increase in the duration of elimination half-life (both after single and repeated intramuscular or intravenous injection) up to an average of 48%, and a decrease in total body clearance was observed.

Sertofen is indicated for intramuscular and intravenous injection.

The drug is intended for short-term (not more than 2 days) administration in acute pain syndrome period. Subsequently it is possible to switch the patient to an oral analgesic treatment.

The total daily dose should be reduced to 50 mg in patients with mild to moderate compromised liver function (Child-Pugh score 5 - 9), and hepatic function should be closely monitored. Sertofen is contraindicated for patients with severe hepatic impairment.

Sertofen may be mixed in small volumes (e.g., in a syringe) with injectable solutions of heparin, lidocaine, morphine and theophylline.

The content of one ampoule (2 mL) should be injected slowly deep into the muscle.

The content of one ampoule (2 mL) is dissolved in 30-100 mL saline solution, glucose solution or Ringer's solution (lactate). The solution should be diluted aseptically and protected from natural daylight. The prepared solution (should be clear) is injected as a slow intravenous infusion for 10-30 minutes.

The solution of Sertofen diluted in 100 mL saline or glucose solution may be mixed with dopamine, heparin, hydroxyzine, lidocaine, morphine, pethidine and theophylline.

If necessary, the content of one ampoule (2 mL) is injected intravenously over no less than 15 seconds.

- hypersensitivity to dexketoprofen or other NSAIDs, or to any of the excipients of the drug;

- history of attacks of asthma, bronchospasm, acute rhinitis, urticaria or angioneurotic oedema that were caused by previous use of substances with a similar mechanism of action (e.g. acetylsalicylic acid and other NSAIDs);

- gastrointestinal bleeding (including those related to previous NSAIDs therapy), other active bleeding;

- bronchial asthma (including in past medical history);

- hemorrhagic diathesis or other coagulopathies;

- the third trimester of pregnancy and lactation period;

The drug is contraindicated for epidural, subthecal or intrathecal injection due to its ethanol content.

Sertofen solution for intramuscular and intravenous injection must not be mixed in a small volume (e.g., in a syringe) with solutions of dopamine, promethazine, pentazocine, pethidine or hydroxyzine, as this will result in a precipitation of the solution. The diluted solutions for infusion should not be mixed with promethazine or pentazocine.

Sertofen should not be co-administered (in one syringe, in one bottle, etc.) with other drugs (solvents), other than those specified in this instruction.

The use of Sertofen with concomitant NSAIDs, including cyclooxygenase-2 selective inhibitors, should be avoided.

Before starting treatment with dexketoprofen trometamol and in case of any history of esophagitis, gastritis and/or peptic ulcer, one should make sure of their remission. Patients with symptoms of GIT pathology and history of gastrointestinal diseases should be monitored for digestive disorders, especially gastrointestinal bleeding.

Caution should be advised in patients receiving concomitant medications which could increase the risk of ulceration or bleeding: oral corticosteroids, anticoagulants such as warfarin, selective serotonin-reuptake inhibitors or anti-platelet agents such as aspirin.

Caution should be exercised when prescribing the drug to patients with hepatic and/or renal dysfunction, as well as to patients with arterial hypertension and/or heart failure, as they may experience renal function deterioration, fluid retention and edemas in association with NSAID therapy.

INFLUENCE ON ABILITY TO DRIVE AND OPERATE MECHANISMS

The treatment with the drug may lead to a reduced ability to concentrate and to a decreased psychomotor speed due to the possibility of dizziness and drowsiness.

The efficacy and safety of Sertofen have not been established in children.

interaction WITH OTHER DRUGS

The concurrent administration of several NSAIDs, including high doses of salicylates (more than 3 g a day) increases the risk of gastrointestinal bleeding and ulcers due to the synergistic effect.

The concurrent administration with oral anticoagulants, heparin in doses higher than the preventive ones and ticlopidine increases the risk of bleeding due to the inhibition of platelet aggregation and gastrointestinal mucosal damage.

NSAIDs increase blood lithium levels, which may reach toxic values; therefore, this parameter requires monitoring during the prescription, dose adjustment and after withdrawal of treatment with NSAIDs.

In co-administration with methotrexate in high doses (15 mg a week and more) there is an increase in hematological toxicity of methotrexate due to a decrease in its renal clearance against the treatment with NSAIDs.

In concurrent administration with hydantoines and sulphonamides there is a risk of increased toxic effects of these substances.

If it is necessary to co-administer the drug with diuretics, ACE inhibitors, consideration must be given to the fact that NSAID therapy is associated with a risk of acute renal failure in dehydrated patients (a decrease in glomerular filtration caused by inhibition of prostaglandin synthesis). NSAIDs may reduce the hypotensive effect of some drugs. In case of combined prescription with diuretics, it is necessary to ensure that the patient is adequately hydrated and to monitor renal function before NSAID prescription.

The concurrent administration with methotrexate in low doses (less than 15 mg a week) may increase hematological toxicity of methotrexate due to a decrease in its renal clearance by NSAIDs. Weekly blood count checks should be done during the first weeks of the combination. Enhanced monitoring should take place in the presence of even mildly impaired renal function, as well, as in elderly.

The concurrent administration with pentoxyfylline increases the risk of bleeding. Intensive clinical monitoring and frequent control of bleeding time (coagulation time) are required.

In co-administration with zidovudine there is a risk of increased red blood cell toxicity due to action on reticulocytes, with severe anemia occurring one week after NSAID prescription. It is necessary to check all blood cells and reticulocytes 1-2 weeks after the beginning of NSAID treatment.

NSAIDs can increase the hypoglycaemic effect of sulfonylureas by displacement from plasma protein binding sites.

There is an increased risk of bleeding upon concurrent administration with low molecular weight heparins.

NSAIDs may reduce the hypotensive effect of beta-adrenergic blocking agents, which is caused by inhibition of prostaglandin synthesis.

Upon concurrent administration with cyclosporine and tacrolimus, NSAIDs may enhance nephrotoxicity, which is mediated by the action of renal prostaglandins. During the combination therapy, renal function has to be measured.

In concurrent administration with thrombolytics there is an increased risk of bleeding.

The co-administration with probenecid may increase plasma NSAID concentrations due to inhibition of renal secretion and/or glucuronoconjugation. This requires a dose adjustment of NSAIDs.

Because of a theoretical risk that prostaglandin synthetase inhibitors may alter the efficacy of mifepristone, NSAIDs should not be used earlier than 8-12 days after mifepristone withdrawal.

In case of accidental overdose, immediately institute symptomatic treatment depending on the patient's state.

Dexketoprofen trometamol may be removed from the body by dialysis.

5 amber glass ampoules of 2 mL are in a contour tray.

1 or 2 contour trays with a leaflet are in a carton box.

Store in a protected from light place at temperature not exceeding 25ºС.

Do not use after the expiry date.