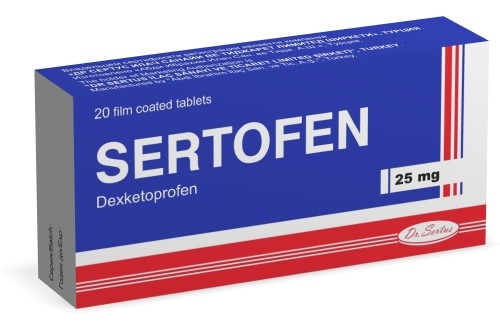 Description: round, biconvex, white film coated tablets with score lines at both sides.

Dexketoprofen is a propionic acid derivative that has an anti-inflammatory, analgesic and antipyretic action. The mechanism of the drug action is based on the inhibition of synthesis of prostaglandins that play an important role in the pathogenesis of pain and inflammation due to the inhibition of cyclooxygenase-1 and cyclooxygenase-2. The analgesic effect starts 30 minutes after the drug administration and its duration is from 4 till 6 hours.

A high level of plasma protein binding (99%) is characteristic for dexketoprofen. Volume of distribution is on an average 0.25 l/kg.

The elimination half-life is 1.65 hours. The main part of the drug is eliminated in urine as metabolites (after glucuronidation). The lengthening of the elimination period on an average up to 48% and the lowering of total body clearance are observed in elderly patients.

- relief of pain of different genesis  (including posttraumatic or postoperative pain, pain due to bone metastases, pain due to renal colic, radiculitis, neuralgia, dysmenorrhoea, toothache).

Sertofen is administrated orally during a meal, washing down with sufficient quantity of water.

The dosage regimen is established individually depending on the kind and intensity of a pain.

In the patients with compromised liver or kidney function and in the elderly patients the administration of Sertofen should be started with lower doses – not more than 50 mg per day.

- hypersensitivity to dexketoprofen or other NSAIDs or to any of the excipients comprising the drug;

- disease history of asthma attacks, bronchospasm, acute rhinitis, urticaria or angioneurotic edema appeared due to the administration of the drugs with similar mechanism of action (acetylsalicylic acid and other NSAIDs);

- the patients with active duodenum and gastric ulcer or the presence of repetitive episodes of ulcer disease (two or more episodes);

- gastrointestinal bleedings (including those related with the previous administration of NSAIDs), other active bleedings;

- bronchial asthma (including the medical history);

- hemorrhagic diathesis or other coagulopathy;

- children and adolescents under 18 years old.

It is necessary to exercise a caution when the drug is prescribed to the elderly patients (older than 65 years old), patients with allergic reactions, with systemic diseases of connective tissue and patients with dyshematopoiesis.

As with other NSAIDs, Sertofen can lead to an increase of plasma creatinine and nitrogen concentration. A slight transient augmentation of indices of certain liver function tests, as well as the apparent increase in the AST and ALT levels can be observed during the therapy with dexketoprofen.

The elderly patients have a need in periodical monitoring of liver and kidney function.

Dexketoprofen can mask the symptoms of infectious diseases.

It is necessary to instruct the patients that when side effects appear, as well as if a clinical effect is not observed during 3-5 days of the treatment, they should inform their doctor about this.

EFFECTS ON THE ABILITY TO DRIVE AND USE MACHINES

During the treatment it is necessary to exercise a caution while driving and performing other kinds of activities involving the heighten attention concentration and the high rate of psychomotor reactions.

Sertofen is contraindicated in the third trimester of pregnancy and during lactation. In the first and second trimester Sertofen can be administrated only in case of need, under the doctor’s recommendation, in minimal doses and during the shortest period of time.

The drug is contraindicated for administration in children and adolescents under 18 years old.

The co-administration of dexketoprofen with other NSAIDs, including salicylates, increases the risk of gastro-intestinal bleedings.

When co-administered with oral anticoagulants, heparin the drug increases the risk of bleeding development.

NSAIDs increase the blood lithium concentration, thus it is necessary to control this index during the drug administration, the change of dose and after cancelation of NSAIDs.

The co-administration of NSAIDs and methotrexate in high doses (more than 15 mg per week) increases the hematological toxicity of the last one.

When the drug is co-administered with hydantoins and sulfonamides it is possible the strengthening of the toxic properties of these substances.

Combinations that should be used with caution during administration

Dexketoprofen weakens an antihypertensive action of diuretics, inhibitors of angiotensin-converting-enzyme.

The co-administration with serotonin reuptake inhibitors, oral glucocorticoids increases the risk of the development of the gastro-intestinal bleedings.

NSAIDs strengthens the hypoglycemic action of sulphonylurea due to its displacement from the sited of blood plasma protein binding.

The risk of the development of the gastro-intestinal bleedings is increased when the drug is co-administered with pentoxifylline.

In co-administration with zidovudine there is a risk of the increase of toxic effect on erythrocytes, conditioned by the action on reticulocytes with the developement of severe anemia in a week after the prescribing of NSAIDs. It is necessary to control all cellular elements in blood, including  reticulocytes in 1-2 weeks after the beginning of NSAIDs.

NSAIDs can diminish the hypotensive effect of beta-adrenoblockers that is conditioned by the inhibition of prostaglandins synthesis.

When co-administered with cyclosporine and tacrolimus NSAIDs can strengthen the nephrotoxicity that is conditioned by the effect of renal prostaglandins. It is necessary to control the renal function during combination therapy.

The risk of bleeding development is increased in case of simultaneous administration with thrombolytics.

When co-administrated with probenecids the increase of NSAIDs concentration in blood plasma can occur. It is possible due to the inhibition of renal secretion and/or conjugation with glucuronic acid. It requires the dose correction of NSAIDs.

NSAIDs can cause the increase of blood plasma cardiac glycosid concentration.

Due to the theoretical risk of change of mifepristone efficacy under the influence of prostaglandin synthesis inhibitors, NSAIDs shouldn’t be prescribed earlier than 8-12 days after the cancelation of mifepristone.

10 tablets in a blister.

1 or 2 blisters together with leaflet in a carton box.

Store in a protected from light place at temperature not exceeding 25°С.

3 years from the date of manufacturing.

Do not apply after the shelf-life expiration.