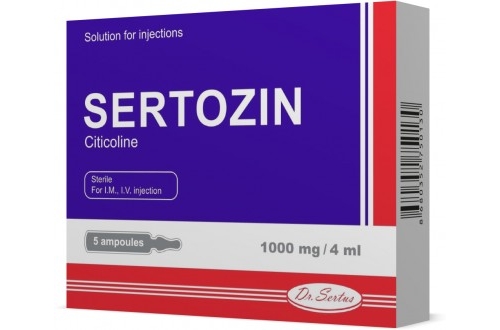 1 ampoule of the drug contains

Being a predecessor of essential ultrastructural components of cellular membrane (mainly phospholipids), citicoline possesses a wide spectrum of action: contributes to recovery of damaged cellular membranes, inhibits action of phospholipases by way of impedance of excessive formation of free radicals, and prevents cell death, affecting apoptosis mechanisms. In acute stroke it decreases the volume of damaged tissue and improves cholinergic transmission. In craniocerebral injury it decreases duration of posttraumatic coma and intensity of neurologic symptoms.

In chronic cerebral hypoxia citicoline is efficient in treatment of cognitive disorders, such as memory deterioration, shiftlessness, difficulties in everyday activities and self-service.

Prolonged treatment with the drug is possible, as citicoline does not influence respiration, pulse and arterial pressure.

After intravenous and intramuscular injection citicoline is metabolized in liver with formation of choline and cytidine. Plasma concentration of choline significantly increases after administration.

Citicoline is to a large extent distributed in the brain structures with rapid implementation of choline fractions into structural phospholipids and of the cytidine fraction into cytidine nucleotides and nucleic acids. Citicoline penetrates into the brain and is actively embedded into cellular, cytoplasmatic and mitochondrial membranes, forming fractions of structural phospholipids.

- cognitive disorders in degenerative and vascular diseases of the brain.

Solution for intramuscular and intravenous injections.

Acute ischemic stroke and craniocerebral injury: the recommended dose is 1000 mg every 12 hours after diagnosing; treatment duration is not less than 6 weeks. 3-7 days after the beginning of treatment the way of administration cam be switched to the intramuscular (1-2 injections daily) or the oral one (if swallowing function is not disturbed).

In prolonged impairments of consciousness the drug can be administered continuously beginning from the first stages of the disease.

No dose adjustment of Sertozin is required for the elderly patients in case of IV or IM administration.

Solution for IV and IM injection in an ampoule is intended for a single administration. Use the solution immediately after opening of the ampoule. The drug is compatible with all types of IV isotonic solutions and dextrose solutions.

- hypersensitivity to the components of the drug;

- expressed vagotony (domination of the tone of the parasympathetic part of the vegetative nervous system).

Sertozin is usually well tolerated. Incidence of unfavourable side effects is very rare (<1/10000) (including independent cases).

Other disorders: fever. In some cases citicoline may stimulate the parasympathetic system and produce a short-term change of arterial pressure.

Such drugs as mannitol and corticosteroid preparations should be prescribed in order to decrease intracranial pressure in brain injuries.

Do not exceed a single 500 mg dose of citicoline in intracranial hemorrhage; the dose can be divided in this case (100-200 mg 2-3 times daily).

Administration of the drug during pregnancy is possible only when the benefit for the mother outweighs the potential risk for the fetus.

In case of necessity to administer the drug during lactation the issue of termination of breastfeeding must be solved.

Efficiency and safety of the drug in children and adolescents under 18 has not been established.

Citicoline increases the effect of levodopa.

Avoid simultaneous prescription of the drug and medicines containing meclofenoxate.

Sertozin may be administered concurrently with hemostatic drugs, intracranial antihypertensive medicines and with common perfusion liquids.

No cases of overdose have been reported due to low toxicity of the drug even in excess of therapeutic doses.

4 ml of solution for injections in ampoules of colourless glass.

5 ampoules in a contour tray.

A contour tray together with an enclosed leaflet in a carton box.

The holder of marketing authorization is