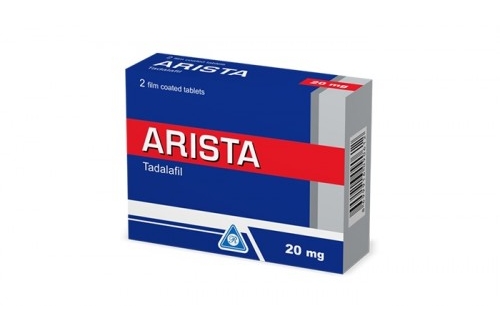 PHARMACODYNAMICS. Medication for treatment of erectile dysfunction.  Arista is a selective type 5 (PDE-5) specific PDEase inhibitor of cyclic guanosine monophosphate. When sexual  excitement causes local nitrogen oxide release, inhibition of PDE-5 by tadalafil leads to increase of cyclic guanosine monophosphate level in cavernous body of penis. It results in the relaxation of arterial smooth muscles and blood flow to penis tissues causing erection. Tadalafil does not  produce any effect in case of absence of sexual stimulation.

Studies in vitro have shown that tadalafil is a selective inhibitor of PDE5. PDE5 is an enzyme found in corpus cavernosum smooth muscle, vascular and visceral smooth muscle, skeletal muscle, platelets, kidney, lung, and cerebellum. The effect of tadalafil is more potent on PDE5 than on other phosphodiesterases. Tadalafil is >10,000-fold more potent for PDE5 than for PDE1, PDE2, and PDE4, enzymes which are found in the heart, brain, blood vessels, liver, and other organs. Tadalafil is

Tadalafil demonstrated statistically significant improvement in erectile function and the ability to have successful sexual intercourse up to 36 hours following dosing. Onset of effect appears as early as 16 minutes following dosing in case of sexual stimulation.

No impairment of colour discrimination (blue/green) was detected using the Farnsworth-Munsell 100-hue test. This finding is consistent with the low affinity of tadalafil for PDE6. Moreover, the effects on visual acuity, electroretinogram, intraocular pressure and pupil size have not been detected.

Several studies were conducted in men to assess the potential effect on spermatogenesis of Arista 10mg (one 6-month study) and 20mg (one 6-month and one 9-month study) administered daily. In two of these studies decreases were observed in sperm count and concentration related to tadalafil treatment of unlikely clinical relevance. These effects were not associated with changes in other parameters, such as motility, morphology, and FSH.

Pharmacokinetics determined with a population approach in patients with erectile dysfunction are similar to pharmacokinetics in subjects without erectile dysfunction. Tadalafil exposure (AUC) in patients with diabetes was approximately 19% lower than the AUC value for healthy subjects. This difference in exposure does not warrant a dose adjustment.

Hypersensitivity to any ingredient;

Administration to patients who are using any form of organic nitrate is contraindicated;

Concurrent administration of Arista and doxazosin, as well as other medications for treatment of erectile dysfunction is not recommended.

(creatinine clearance is less than 30 ml/min);

Patients with lactose intolerance, the lactase deficiency or glucose-galactose malabsorption should not take this medicinal product.

Administration in children and adolescents below the age of 18.

There is limited clinical data on the safety of Arista in patients with severe hepatic impairment (ChildPugh class C); if prescribed, a careful individual benefit/risk evaluation should be undertaken. In patients who are taking alpha1 blockers, concomitant administration of Arista may lead to symptomatic hypotension in some patients. Arista should be used with caution in patients with anatomical deformation of the penis (such as angulation, cavernosal fibrosis, or Peyronie's disease) or in patients who have conditions which may predispose them to priapism (such as sickle cell anaemia, multiple myeloma, or leukaemia). Caution should be exercised when prescribing Arista to patients using potent CYP3A4 inhibitors (ritonavir, saquinavir, ketoconazole, itraconazole, and erythromycin), as increased tadalafil exposure (AUC) has been observed if the medicinal products are combined.

The adverse reactions reported were transient, and generally mild or moderate and diminish in case of continuation o intake.

Arista is administered to adult men with no regard to food intake.

The recommended dose is 20 mg prior to anticipated sexual activity. The product may be administered 16 minutes prior before sexual activity. Efficacy of tadalafil is maintained at least 36 hours following the administration.

Maximal recommended frequency of administration is once dailyç

2 tablets in a blister. 1 blister in a carton box with enclosed leaflet.

4 tablets in a blister. 1 or 2 blisters in a carton box with enclosed leaflet.