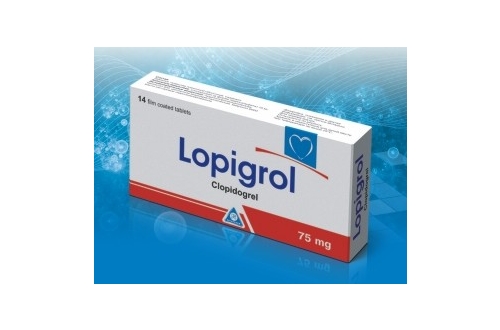 PHARMACOLOGICAL PROPERTIES:
PHARMACODYNAMICS. Lopigrol - antiaggregatory agent that has a coronary vasodilating effect. It blocks selectively and nonreversibly the binding of adenosindiphosphat (ADP) to thrombocyte receptors, inhibits its activation and reduces a quantity of functioning ADP-receptors, prevents sorption of fibrogen and inhibits a thrombocyte aggregation. It decreases a thrombocyte aggregation, caused by other agonists due to the blockade of ADP released thrombocyte activity increase not effecting on the activity of phosphodiesterase. Thrombocyte aggregation inhibition can be seen in 2 h after a single dose intake of the preparation (40% inhibition). At re-application an effect strengthens and a stable state is attained in 3-7 days of treatment (up to 60% inhibition). Thrombocyte aggregation and bleeding time returns to the initial level as thrombocytes renew, that is in 5-7 days after discontinue the application of Lopigrol. It prevents the development of aterothrombosis in the presence of atherosclerotic vascular damage not depending on the vascular process localization (cerebrovascular, cardiovascular or peripheral lesions). PHARMACOKINETICS. At oral application it has a good absorption and is characterized by high bioavailability. Time to Cmax is about 1 h. Clopidogrel is a precursor of an active substance. It is biotransformed in liver with active metabolite - thiol-derivative formation, that is formed by oxidation of clopidogrel in 2-oxo- clopidogrel and the next hydrolysis. An active metabolite is not found in plasma. The half- life period of circulating metabolite is 8 hours after the acute and repeated administration. It removed in urine (about 50%) and faeces (about 46%).

CONTRAINDICATIONS:
- hepatic failure of heavy degree;
- acute bleeding (for example, peptic ulcer or intracranial hemorrhage);
- hypersensitivity to the components of the preparation;
- children and teens under 18 years old.

DOSAGE AND ADMINISTRATION:
For prophylaxis of ischemic disturbances in patients after myocardial infarction, ischemic stroke and diagnosed disease of peripheral arteries in adults (including elderly patients) it is prescribed orally in dose 75 mg 1 time/day independently of the meal intake. The treatment should be started independently in term from several days up to 35 days after myocardial infarction with pathologic wave Q and from 7 days up to 6 months - after ischemic stroke.
At acute coronary syndrome without ST segment elevation (unstable angina or myocardial infarction without wave Q) the treatment should be started with single loading dose 300 mg, then to continue the drug administration in dose of 75 mg 1 time/day (with co-prescription of acetylsalicylic acid in dose of 75-325 mg/day). Because acetylsalicylic acid administration in large dose is accompanied by high risk of bleeding, the recommended dose must be not higher than 100 mg. The treatment course is up to 1 year.
At acute coronary syndrome with ST segment elevation (acute myocardial infarction):
the preparation is prescribed in dose of 75 mg 1 time/day with use of initial loading dose
in combination with acetylsalicylic acid; in combination or without thrombolitics. For the
patients older than 75 years old the treatment
with clopidogrel must be carried out without use
of loading dose. A combination therapy is started
as soon as possible after the symptoms
appearance and it continues minimum during a 4
weeks-period. Maximum effect is noted in 3
months of the drug administration.

PACKAGING:
15 tablets in a blister.
1 blister together with enclosed leaflet in a carton box.