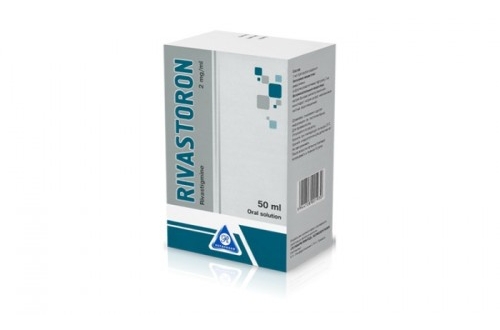 Rivastigmine is selective an acetyl- and butyrylcholinesterase inhibitor for the treatment of dementia of the Alzheimer's type and dementia due to Parkinson's disease. Rivastigimine facilitates cholinergic neurotransmission by slowing the degradation of acetylcholine released by functionally intact cholinergic neurones. Rivastigmine selectively increases the availability of acetylcholine in the cortex and hippocampu, thus has an ameliorative effect on cholinergicmediated cognitive deficits.

Thus, rivastigmine may have an ameliorative effect on cholinergic-mediated cognitive deficits in dementia associated with Alzheimer's disease and Parkinson's disease. In addition, there is some evidence that cholinesterase inhibition could slow the formation of amyloidogenic ß-amyloidprecursor

protein (APP) fragments, and thus of amyloid plaques, which are one of the main pathological features of Alzheimer’s Disease. Treatment with Rivastoron leads to significant improvement of cognitive function (attention, memory, speech), performance and activity in everyday life, as well as the decrease of severity of the disease and its intensity of psychic and behavioral manifestations (agitation, easy crying, illusions, hallucinations). The effect of therapy with Rivastoron is registered approximately on 12th week and is maintained during 6 months of therapy.

Protein binding of rivastigmine is approximately 40%. It readily crosses the blood brain barrier.

Rivastigmine is rapidly and extensively metabolized (half-life in plasma approximately 1 hour), primarily via cholinesterase-mediated hydrolysis to the decarbamylated metabolite. no pharmacokinetic interaction is expected with medicinal products metabolized by cytochromes isoemzymes. Based on evidence from animal studies the major cytochrome P450 isoenzymes are minimally involved in rivastigmine metabolism.

Unchanged rivastigmine is not found in the urine; renal excretion of the metabolites is the major route of elimination. Following administration of 14C-rivastigmine, renal elimination was rapid and essentially complete (>90%) within 24 hours. Less than 1% of the administered dose is excreted in the faeces. There is no accumulation of rivastigmine or the decarbamylated metabolite in patients with Alzheimer's disease.

While bioavailability of rivastigmine is greater in elderly than in young healthy volunteers, studies in Alzheimer patients aged between 50 and 92 years showed no change in bioavailability with age.

The use of this medicinal product is contraindicated in patients with known hypersensitivity to the active substance rivastigmine, to other carbamate derivatives or to any of the excipients

Patients with severe hepatic impairment have not been studied, that is why Rivastoron is contraindicated in this patient group.

Oral solution. The prescribed amount of solution should be withdrawn from the container using the oral dosing syringe supplied. Rivastigmine oral solution may be swallowed directly from the syringe.

Rivastoron is administered twice daily, during breakfast and dinner.

Initial dose: 1.5 mg twice a day. Patients known to be particularly sensitive to the effects of cholinergic drugs should be started at a dose of 1 mg twice a day.

Dose titration: The recommended starting dose is 1.5 mg twice a day. If this dose is well tolerated after a minimum of two weeks of treatment, the dose may be increased to 3 mg twice a day. Subsequent increases to 4.5 mg and then 6 mg twice a day should also be based on good tolerability of the current dose and may be considered after a minimum of two weeks of treatment at that dose level. If adverse effects (e.g. nausea, vomiting, abdominal pain or loss of appetite) or weight decrease are observed during treatment, these may respond to omitting one or more doses. If adverse effects persist, the daily dose should be temporarily reduced to the previous well-tolerated dose.

Maintenance dose: The effective dose is 1.5 to 6 mg twice a day; to achieve maximum therapeutic benefit patients should be maintained on their highest well tolerated dose.

If treatment is interrupted for more than three days, it should be re-initiated at 1.5 mg twice daily. Dose titration should then be carried out as described above.

No dose adjustment is necessary for patients with mild to moderate renal or hepatic impairment.