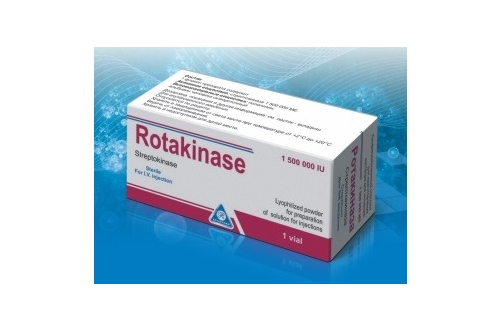 PHARMACOLOGICAL PROPERTIES:
PHARMACODYNAMICS. Rotakinase - fibrinolytic agent containing streptokinase, enzymatic protein produced from group C p-hemolytic streptococcus culture with molecular weight about 50.000 daltons. At interaction with plasminogene (profibrinolysine) it forms a complex that activates a transition of blood plasminogen or blood clot in plasmine (fibrinolysine) - proteolytic enzyme dissolving the fibrin fibers in blood clots and thrombus. This causes the degradation of fibrinogene and plasma proteins, including coagulation factors. It dissolves thrombus through action both on their surface and from inside. PHARMACOKINETICS. T1/2 after intravenous injection of 1 500 000 IU - 1 h, streptokinase - plasminogene complex - about 23 min. It biotransformes in liver by hydrolyze. It eliminated through kidneys in small quantities. Clearance is delayed at liver disease, but renal failure doesn't influence on it.

SIDE EFFECTS:
Nonspecific protein reactions during Rotakinase administration: headache, nausea, fever, allergic reactions (in case of highly expressed allergic reaction it is recommended to administer corticosteroids), bleeding from the injection points, gums. Development of hypotension and arrhythmias. The possibility of embolism should be taken into account.

DOSAGE AND ADMINISTRATION:
It is directed for intravenous injection, and in some cases for intra-arterial or intra- coronary administration. At myocardial infarction (during the first 12 hours) it is prescribed intravenously in a dose 1 500 000 IU, dissolved in 100 ml of 0.9% sodium chloride solution or 5% glucoses solution. It is possible to use intra-coronary injection in a dose of250 000 - 300 000 IU during 30-60 min. At thrombosis of peripheral arteries and veins: in case of short-term thrombolisis - intravenously, in initial dose of 250 000 IU during 30 min, in supporting -1 500 000 lU/h during 6 h; in case of long-term thrombolisis - 250 000 IU intravenously during 30 min, then 1 000 000 lU/h in form of infusion, with duration from 12 h to 3-5 days. At thrombosis of deep vein, pulmonary artery thromboembolism and arterial occlusion - intravenously in a dose of 250 000 IU in 100- 300 ml of solvent during 30 min. The supporting treatment 100 000 IU Rotakinase every hour during 3 days. For dissolution of thrombosis in hemodialysis shunts 10 000 - 25 000 IU is introduced in clotted shunt. Children, including new bom children, at artery thrombosis - intravenously 1000-10000 lU/kg of body weight during 20-30 min, with further continuation (but not more than 5 days) of intravenous infusion of 1000 IU/kg/h.